Concerning a major bug in the gpsmap 276Cx (and one less important one)
Tested on:
– FW 2.30, audio 2.10
– ID 3930490199 (pre-production)
– SD CN NT 2017.1 (same map used in Basecamp)
– GPS in demo, virtual location at route starting point
– routes activated using the NAV button
Attached: demo-route, built in Basecamp; using only few routing (or shaping) points, only to maximize visualisation of the problem – it will occur with almost any route.
1. major bug : basic route import
Expected behaviour:
– after import in the 276Cx the route is exactly the same as original (177km) – regardless of navigation-settings of the device
Actual behaviour:
– after import in the 276Cx the route is ALWAYS recalculated, using the routing/shaping points but using the navigation settings. Depending on settings route-length will vary from 177 to 567 (!!) km.  (the last one is in motorcycle mode with basic-settings)
Screenshots – same original route. Result depending on unit settings: 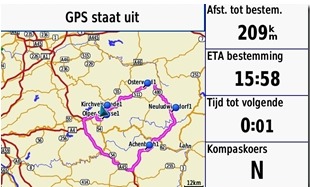 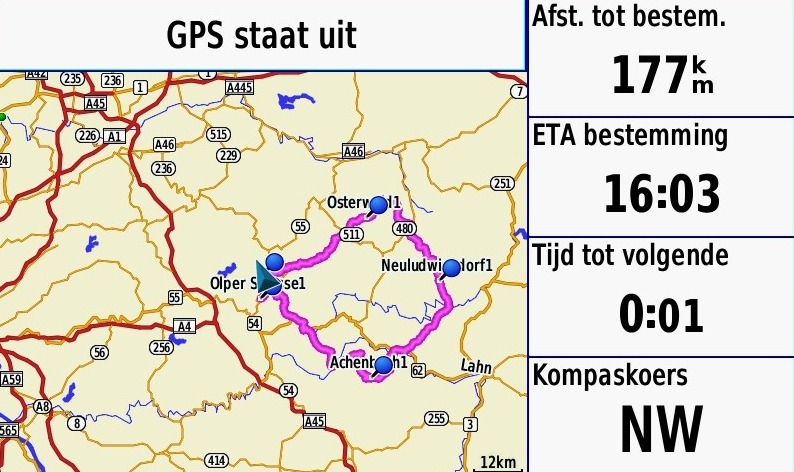 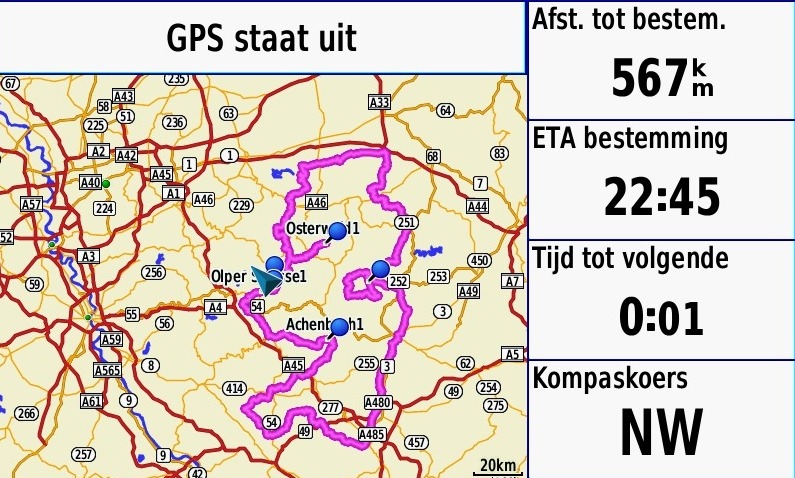 Elaboration:
Why relevant?
– The user mostly has no information on which settings were used in the original route
– routingsettings in Basecamp will behave differently from the devices anyway (e.g. avoidance of build up, using ‘adventurous’ etc).
– The user should be able to rely on perfect route-integrity
The effect is the same as we had in earlier days, with the 276C and Streetpilot WHEN USING DIFFERENT MAPS/MAP-VERSIONS. To prevent this from happening users were always advised to recalculate there routes in mapsource on there own map-version, before sending it to the device. The Zumo behaviour is much more intelligent and also accepts routes built in other map-versions, even other maps; with intact route-integrity.
However: in the 276Cx even working on the same map doesn’t help – the route will allways be recalculated; even when using the same map-version.
Combined with the limitation of 50 via’s this is a big handicap degrading the route-import quality to what we had in the first tomtom riders!
Note: due to a much denser road network this issue might be more important in Europe than in US. Just following the via’s/shaping points simply is not enough. You should avoid calculation or use the xml between shaping points, like the Zumo does.
2. stripped shaping points

Expected behaviour:
As long as the route is not recalculated in the device the route-shape will remain 100% intact. As long as drivers turn off automatic recalculation the route will stay intact, even after detour.
This would solve the problem of max 50 via/shaping points.
Actual behaviour:
The device will, during route-activation, calculate directly to the endpoint; totally ignoring the original routeshape and/or via’s/shaping points. 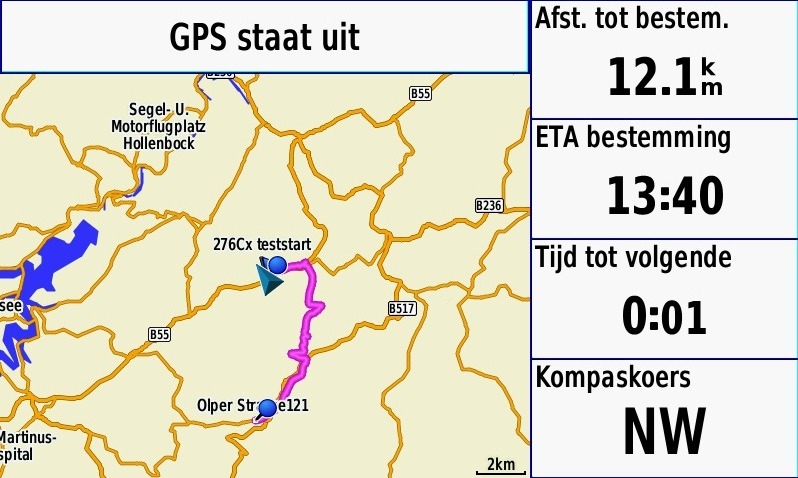 Elaboration:
Since road density in Europe is much higher we often use an average of 1 shaping point per 2 miles. Thus, a day-tour can easily contain 100 to 200 shaping points.
However: the 276Cx accepts only a max of 50 shaping point (this should be 250, like in Zumo). The method mentioned above would be a workaround for this, but…. doesn’t work.
3. General remark (less important, but still):
When a route is activated and the user sees the setting must be wrong (e.g. with the 567 km route) he will change routing settings. However: the recalculated route will ignore all via’s and send directly to the endpoint. Using a rondtrip this will be visible directly (short route – same as screenshot above) – if it’s an A to B route the user might not realise this.
4. Concluding
This is a major issue that should be adressed quickly. With current behaviour I would advise AGAINST buying a 276Cx for motorcycle-use (and note: I will be a handicap for other users too, e.g. with topo pro).
Would very much appreciate direct feedback from the Garmin engeneer working on this: IF, HOW and WHEN this problem will adressed.
If you need anymore information or need me to do any other testing; please let me know.
Kind regards,
Hans Vaessen
www.mrgps.nl